Today, we will venture faaaar beyond Babylonia and her Semitic languages, and we shall focus on the Anglo-Saxon language (Old English). In particular, we will focus on two distinct alphabetical characters that have been used in the Anglo-Saxon writing system, that are no longer used in Modern English writing.
In order to understand this post, I shall have to gloss over a VERY brief evolution of the English language as it occurred in Britain, and why the lingua franca changed so much. Feel free to scroll down to Part II and return up here at the very end.

43 CE to ~400 CE: Brittania (Part of the Roman Empire)
The isle of Britain in 43 AD was under Roman occupation. During that era, it was known as Brittania, where Brittonic (a Celtic language) was the common tongue. Though Brittonic remained a Celtic language in its origins, the presence of Roman culture influenced it with Latin. We have yet to find written evidence of this language.
The end of this era came with a withdrawal of the Roman rule in Brittania, as an influx of Germanic tribes established settlements on the isle: Jutes, Angles, and Saxons.
By 450 AD it became official: the Anglo-Saxon culture and language was to prevail in the coming years.

~450 CE to 1066 CE: Anglo-Saxon England
450 CE: The Germanic culture started to gain influence from eastern edges of the isle until it grew westward through Britain (except for Cornwall). The combination of language from the Angles and Saxons, with a bit of the local Brittonic, gave birth to a new language. However, this was not to be the complete loss of Roman influence in the isle. In the year 600 CE, Irish christian monks introduced the Latin script. However, instead of using it for writing in Latin, they’d modify it for use to write in the emerging language of the time: Old English (Anglo-Saxon). This Germanic era continued until it ended with The Battle of Hastings at 1066. The Anglo-Saxons resisted, but were defeated in the hands of the Norman-French conquerers.

1066 CE: Anglo-Norman England
With their victory, Normandy established an Anglo-Norman era in the isle. A heavy influence of French loan words entered the vernacular of Anglo-Saxon within a century after the Norman conquest. It was during that period that Old English (which was already Germanic, with some Celtic Brittonic, and sprinkles of Latin words from the Roman period) blended with the French of that time period. This era was to mark a gradual shift of language on the isle, from Old English and into Middle English.

TO SUM UP: English is a hodgepodge of Celtic, Latin, North Sea Germanic, and mediaeval French. Like many world languages, evolving over time and breeding a bit with neighbouring languages.

Shifting back into focus: Those two letters I mentioned before my history lesson?

Those characters were introduced into the Anglo-Saxon alphabet in the 8th century, in order to supplement their new writing system. Basically, England at the time began using the Latin alphabet for writing in their own language, rather than in Latin. However, Latin phonology did not have all the sounds that the Anglo-Saxon language needed. This is because Latin is a pure Romance language, whereas English was a Germanic language — a few sounds that exist in one language could be absent in the other language family.

Now, what did the Anglo-Saxons do with this challenge?

The missing letters that Latin alphabet did not provide, had to be imported from the Runic fuþorc (futhorc) alphabet, which was used to write in Old Frisian. By using Latin alphabet, and filling in the missing sounds with letters from Runic futhorc, the Anglo-Saxons finally had a complete alphabet to write all their sounds! Those imported letters were: Æ/æ (ash), Þ/þ (thorn), and Ƿ/ƿ (wynn).
Ð/ð (eth) was created by adding a slash on the D/d to distinguish it from the regular Latin D/d. In total, we have 4 additional characters. All of this marked the birth of the Old English Latin alphabet! This slightly-modified Latin writing system fit the needs of Old English to represent such words like: þunor for thunder and broðer for brother.

These archaic characters were used in Old English orthography from the 8th century until they fell out of use in the 12th century. This post is only about the two of those letters: the Thorn and the Eth.

Specific to the Thorn and the Eth, is that I believe if we would revive them into the Modern English writing system, it may prove to be a useful learning tool for those just starting to learn English. It would also be beneficial, because . . . who doesn’t like consistency in language? 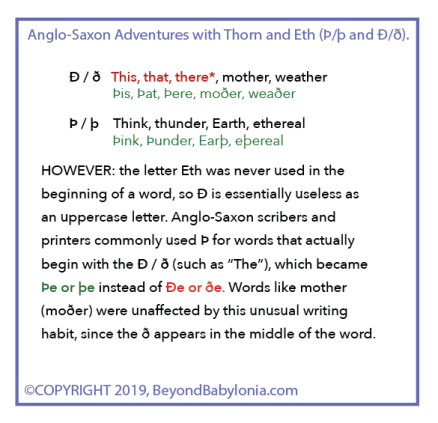 Þ or þ – “Thorn”
Used in Old Frisian and Old Anglo-Saxon, and currently used in Icelandic.

THORN:
Thorn is one of the characters originating from the Old Runic futharc, equivalent to the Greek θ (Theta). Both the Thorn and Theta are voiceless dental fricatives.

But wait! If the Thorn was imported from a Germanic language, then why don’t Germans today use the th-sounds? Because Angles and Saxons spoke a variety of West German called Ingvaeonic languages (spoken on the North Sea coast), whereas Modern German is a descendant of High German, originating from the Irminoic German.

Beginning from the 7th century, usage of the thorn was commonplace in scriptures.
Then, there came the standard practice of the Thorn grapheme being used to transcribe two separate phonemes: the th in “Thankful” and the th in “Therefore”. If you look at Modern Icelandic, you see that they consistently kept the þ as an unvoiced dental fricative, and ð as a voiced dental fricative. Why has Middle English swapped out the letter ð for þ to be used in both instances?! Why the confusion?

Upon the advent of early printing in the 16th century, the thorn was further erroneously used. Typefaces created in mainland Europe, whether from Germany or Italy, did not include the Thorn as a letter. They didn’t have to, as it’s not a letter or sound that is recognised by Germans, Italians, or French. Greeks, yes, but Greek uses a different alphabet. So, what did they do in English to combat this loss of a letter?! A shortcut, namely: to use the letter “y” in words that were spelt with a þ. They look close enough, right? Perhaps not in this blog with my sans serif font, but if you examine the earliest Blackletter typefaces, you will see a resemblance.

Fraktur or Blackletter, being the choice typeface of the time period, had the þ resembling a “y”, but with a thin line on top. At first, it was not an issue. The þ did not have it’s own stamp in imported typefaces, so the y was a good enough substitute. Printers and publishers would exchange the þ with “y”, but it would still be read and pronounced as “th”.

So the word “the”, which was hand-written as “þe” became printed as “ye” – pronounced with a “th”, but written with a “y”. The issue with Thorn dwindling as the Y gradually took its place, EVEN when typefaces began to change, because the grapheme þ was not made widely available for printing! The loss of þ is the fault of the limitations of the early printing press which could not accommodate all the needs of Middle English orthography.

I must now introduce the other character responsible for producing the “th” sound (of another variety). There is a difference between the “th”s found in the following two sentences:
(1) Þink of your healþ – think of your health.
(2) Ðey are togeðer – they are together.
The “th” variant of sentence (2) is known as “Eth”.

Ð or ð – “Eth”
Originated from the D/d, and is still used in Iceland today

ETH:
During the adoption of Latin alphabet in England, the “Eth” was modified from the Roman letter “D / d”, in order to symbolise the voiced dental fricative in words like “weather”. “Eth” became obsolete far earlier than the “Thorn”. It’s a tragic story.
First off, we do not see the capital form of the Eth (Ð). In all proper nouns and words beginning with Ð, the Þ would take its place in the written form, but when those same words were read out loud, they were pronounced with the “Eth”. Eth is only seen in the middle of a word, in which case, it would always be in its minuscule form (ð).

It’s like the Eth got fired and Thorn got a promotion, but Eth is still doing all the work.

As the “Eth” was used seldomly in writing and printing, the “Thorn” gradually took control for both unvoiced AND voiced dental fricative sounds. So words like weaðer became weaþer, even though the ð is in the middle of the word here. Was this due to simplification of characters, or was it the fact that writers and printers grew so accustom to replacing Ð/ð with Þ/þ, that it didn’t matter anyway, so they slowly replaced all Eths with Thorns?!!
Eventually, both the Thorn and Eth got fired from their jobs, never gained a full noble status in the alphabet, and both got replaced by the digraph “th”, composed from 2 separate alphabetical letters, “t” and “h”.

(1) The Norman Invasion of 11th century.
(2) Simplification over a long period of time that led to Þ/þ taking over words that Ð/ð were responsible for. Use of Eth dwindled quickly in favour of Thorn to represent both “th” sounds.
(3) Printing press limitations: not having the Þ/þ in typefaces, so Y/y was used instead, due to them sharing a similar appearance.

The month of August thrills the northern youth with the promise of having both ethereal thunderstorms and soothing weather, perfect for smoothies.

At ðis point, you should be able to read ðis text wiþout struggling. Oh, þink of how much ink one could save wiþout using ðe digraph “th” anymore! Seriously, I have þought about ðis for a very long time. From now on, I shall use ðe letter ð and Ð to symbolise the diagraph “th” in “there” (ðere), and I shall use þ when typing ðe “th” in “thing” (þing). Ðis I plan to do when typing AND writing. I am reviving ðe Old English ways of ðe year 800 CE.

By now, I am tired of copying and pasting the ðs and þs. In the future, I will add these letters into my keyboard for permanent access.
Just imagine teaching this to your kids. Then once in pre-school, they get called by teacher to write the alphabet, and s/he will include those two letters in addition to the rest of the alphabet. Teacher might be perplexed, but once the kid explains, the teacher would have had a learning experience of their own! Even better is if I could be that teacher — I’d get an opportunity to teach 15-20 kids about these newly revived letters! I might also get fired after receiving complaints from some parents. *shrug*

Before you go, here is a hint to never forget what these graphemes stand for:

You can always remember ðat ðe “þ” sounds like ðe “th” in “thing”, because þ looks like a mouþ wiþ ðe tongue sticking out.
Specimens: :p :b :þ

You can always remember ðat ðe letter “ð” sounds like ðe “th” in “therefore”, because it looks like a bumblebee. Bumblebees make that ððððððð sound.
Specimen: 🐝 ð